Invariably, in election years' we get a lot of questions from clients and other investors wondering what the impact of the presidential election will be on their investments.   This year the prevailing fears of our Republican leaning clients seem to be about Joe Biden being elected, what will happen to tax rates and interest rates, and “when are we getting out of the stock market because it’s going to crash”

We understand that in today’s media frenzied and social media driven news cycle someone constantly wants to stoke our emotions of fear about what might happen.  It’s easy under these circumstances to subscribe to a theory of doom.  We prefer a fact-based approach to investing and financial planning.  The facts are clear that investor fears of a President of a political persuasion other than their own are, quite simply, unfounded.

Since World War II, the stock market’s performance has been better under Democratic Presidents than under Republicans.  Furthermore, the best results were when the President was from one party and at least one house of Congress was from the other party.  This prevented any one party from having too much control and putting in place extreme policies.

The Republicans (of which I am one) probably do not believe these statements.  So let’s provide some fact-based evidence.  The chart below (source: cnn.com) shows the stock market performance under the last six Presidents. Note that most were two-term President’s with George H.W. Bush being one-term and Trump having complete most of his first term (dark blue line). 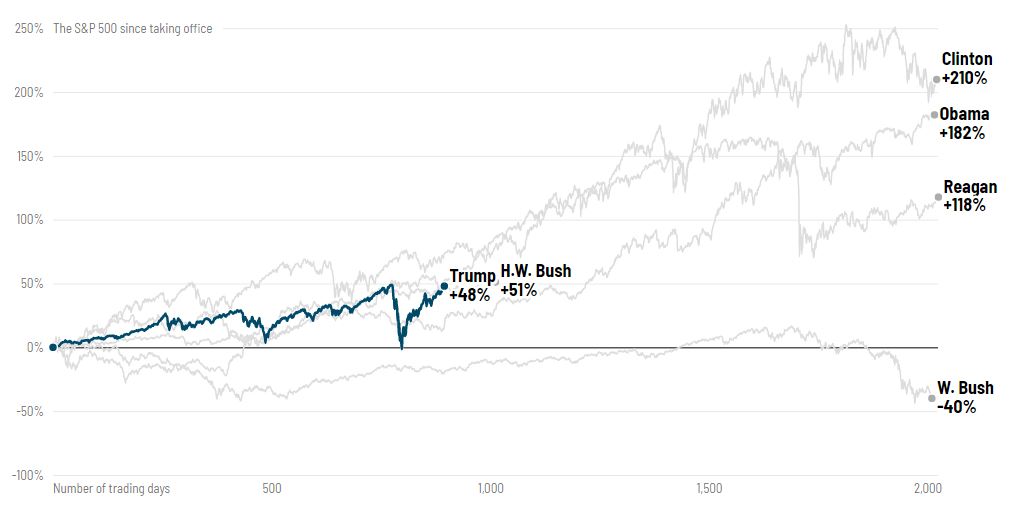 Takeaways from this chart:

The chart above is a bit “busy” so here’s the numbers in an easy to read table:

While Republicans are known as the “pro business” party, it has not translated into better stock market performance.  Of course, there are a lot of external factors that aren’t necessarily in the President’s control that can affect market performance.  Reagan inherited high inflation.  George Bush had the Dot.com bust and 9/11 terrorist attacks.   Obama had the ongoing war on terrorism, Clinton, well he had other distractions, mostly self-imposed.  Every President will have to deal with something.

A big part of the argument against a Democratic President is that they lean toward more socially oriented programs and it takes higher taxes to pay for these. But, tax rates just don’t have that much to do with stock market performance in the longer-run, contrary to popular belief.  In the late 1940’s the top tax bracket was 94% and stocks performed well after WWII.   In the 1950’s through 1970’s the top tax rate was 70% and two of those three decades were very good for stocks (1970’s were a flat decade).

In 2001, the highest marginal rate was dropped slightly to 35% and stocks experienced a roller-coaster performance with two 50% declines and were flat for the entire decade.  In 2013 the top rate was once again raised to 39.6% with a healthcare add-on tax for high wage earners making the rate 43.4%   This rate stayed in effect until 2018 and it was generally a pretty good five year period to be an investor in stocks.   The current maximum rate is 37% with the healthcare add-on tax still in existence making the rate 40.8% for the nation’s top-earners.  Stocks have done well during this period, even including the effects of the COVID-19 economic slowdown, so far.

Bottom line, it’s hard to find a pattern in the tax rates and market performance during various periods that those rates were in existence.  I believe the reason that this lack of pattern exists is that so few people are subject to the very highest tax rate.  Those wealthy and high wage-earning people are less impacted by having to pay a high tax rate on the upper portion of their earnings.  They still have enough money to buy nice homes, drive nice cars and take great vacations so the impact on economic activity is low.  The drop in corporate tax rates in 2018 is a positive factor as it makes U.S. corporations more competitive with foreign companies in pricing goods and services and reduces the double taxation of corporate profits.

In closing, I would add that there is no case I can find of more than a temporary blip in stock prices in the wake of any election during market history since WWII. While recent elections have been quite close, investors tend to position themselves for potential outcomes in advance.   Currently, investors are fully aware of Mr. Biden’s 10+ percent lead in most polls or they have their head in the sand.   While a lot can change in the next 3 months, a Biden victory when we wake up on November 4th would hardly be classified as a surprise.  Again, not making predictions, just working with the facts as we know them.